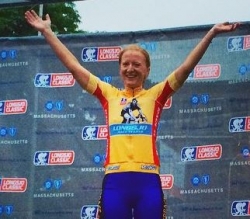 Full time pediatric physical therapist, mom of two sons, member of the NEBRA board, member of Team ERRACE, Promoter for the 2018 Nutmeg State Games, coach for the ERRACERs (a youth cycling team), co-founder of the CT Women’s Bike Racing Initiative, and that is not all according to fellow riders Lisa Colella and Kim DuBord.

Laura has been cycling for 28 years and counting. Laura began racing in college for Boston University in 1993, representing the Eastern Collegiate Conference at Nationals in Reno, NV in 1995. Laura worked her way up from a category 5 (beginner) to a category 1 (elite). Laura continued on to race for several USA Cycling teams and currently for team ERRACE, which stands for Everyone Ride and Run Against Cancer Everyday. Laura began track racing on the velodrome in 2005 and also competes in mountain bike and cyclocross races. Her racing strengths include Criterium racing, sprinting and track cycling.

Laura participated in the 2011 Master’s Track Cycling National Championship, where she earned a gold medal in the women’s 35-39 500m individual time trial and a silver medal in match sprints. In 2016, Laura was the winner of the Greenfield, MA Criterium. In 2015, she was the winner of the Keith Berger East Hartford Criterium, Leominster MA Criterium, and 2nd overall in the New England “Crit Week.” In 2014, she won the White Plains, NY Criterium, the Keith Berger East Hartford Criterium and the New Britain Criterium. In 2013, she won both the Orchard Beach, NY and Rocky Hill Criteriums. In 2012, she won the Orchard Beach, NY and Jamestown, RI road race. In 2010, she was the champion in the New England Regional Elite Women’s Criterium. In 2007, she earned 4 bronze medals at the Masters National Track Championships. Laura has also earned multiple Empire State Games (NY) gold medals and has achieved over fifty track race victories since 2005.

In the cycling community, Laura has been the co-founder and director of the CT Women’s Bicycle Racing Initiative since 2017, helping new women racers enter the sport and develop riding and racing skills. She also is a youth cycling coach for road racing and mountain biking for the CT Cycling Advancement Program. From 2000-2007, Laura served as the race director or the Hudson Valley (NY) Race Weekend, which included the Poughkeepsie Criterium and the Union Vale road race. From 2005-2008, Laura was also a USA cycling race official.

Laura has also competed in both the CT Masters’ Games and the ShopRite® Nutmeg State Games and has medaled in almost all of events she has entered. In addition to the women’s events, Laura has also competed in the men’s divisions when there weren’t enough women’s events to compete, or women to compete in them. Laura came in 14th out of 28 in a 2017 men’s masters racing event, finishing only 7.2 seconds behind the 1st place finisher. Laura has earned many different medals in our Women’s Pro 123, Women’s Masters 1-4, and Time Trial Categories and in total has earned seven bronze and eight gold medals between 2012 and 2019.

Outside of cycling, Laura also enjoys running. She has completed 7 half marathons and 1 full marathon. Laura has been a pediatric physical therapist since 1996, and currently is working for a local school district and in the State of CT “Birth to Three” system. Her husband, Wade also races. He competes with Team Horst Sports. She is also a mom to two boys who are following in their parents’ footsteps and have also competed in the games.

In the fall of 2017, Laura agreed to take over the role of Promoter of the 2018 Nutmeg State Games Criterium. One of the first priorities was to make the event “family of riders” friendly.  Having firsthand knowledge and practical experience, several positive changes were implemented to the event. Two junior race categories were added for boys and girls 9-14 and 15-18. This  led to the inevitable revamp of the race schedule so parents would have enough time to assist their kids on and off the course as well as be prepared for their own event. Being co-founder of the CT Women’s Bike Racing Initiative it was also important that female riders had the opportunity earn advancement points at the Nutmeg event.  Laura worked directly with CSMG staff, the director of NEBRA, and polled past participants to develop a new format. In June of 2018, the “new and improved” event was implemented her inaugural year. The return of past participants and growth in participation in 2019 exemplifies how well it was received by the cycling community.

Her teammate, Matt Waskiewicz, had this to say:  “Laura Summers has been competing at the Nutmeg games for many, many years. She has competed in many different categories. Women’s Pro, Masters, and Men’s Masters. She has won podium more times than I can count. Now, she races multiple races and works for her teammates to help them upgrade. She is an amazing, and unselfish teammate. She also volunteers her time as one of the head coaches for the CCAP ERRACERS road team. She is also very active in promoting the CT Women’s bike racing Initiative as one of those founders. She stepped up as the promoter of the Nutmeg race. I’ve been racing at the Nutmeg race for 10 years and this year was the smoothest running to date. As a member of Team ERRACE, she sits on the board and is the women’s team captain. Laura constantly leads by example on and off the race course. She constantly shows great sportsmanship and is very appreciative to her fellow racers, promoters, officials and volunteers. She is truly one of the best mentors our sport has.”

Laura once said in an article written by the Shoreline Times, “It’s been a very long and gradual road for me.  I’m here because I’ve met so many great people along the way who’ve taught me how to suffer and push myself and be a better athlete, to find my strengths and hone my strengths, and train my weaknesses.”

Laura's embodiment of the Olympic Spirit - which requires sportsmanship, respect, mutual understanding, friendship, solidarity, mental and physical toughness, and fair play – stands out among the rest. We are proud to honor Laura with the CT Masters’ Athlete of the Year Award and look forward to seeing her ride, educate and encourage others with her skills and great attitude for many years to come!

"My experience with the CT "Games" began in 2004 and has been pure fun and wholly inspirational!  I look forward to each year and hope that any and all 50+ athletes come on out to play!"

See what else people are saying.

The Richard P. Garmany Tennis & Leadership Award was established in 2011 to honor the late Richard P. Garmany, a long-time recreational tennis player who unselfishly gave his time and energy to promote the sport of tennis.  This award recognizes one male and one female Senior Games Tennis Participant who through guidance and by their example have encouraged and inspired others to play tennis, assume leadership roles and provide education to the tennis community.  This award is supported by the Richard P. Garmany Fund at the Hartford Foundation for Public Giving.*

Due to the evolving nature of COVID-19 (Coronavirus) and the threat it poses to public health, we have postponed all of the CT Masters' Games sporting events to the fall. Please refer to your sports webpage for the rescheduled date on https://ctmastersgames.org/.

Please know that we are committed to the health and well-being of our participants and will be taking the necessary steps to help prevent the spread of the virus and keep everyone safe.

The Connecticut Sports Management Group, Inc. (Nutmeg State Games & CT Masters’ Games) is following the recommendations and directives of the Centers for Disease Control & Prevention (CDC) and the CT State Department of Public Health / Governor’s Office. We will follow their guidelines and recommend that our participants refer to the CDC website for resources on how to prevent the spread of coronavirus. https://www.cdc.gov/coronavirus/2019-ncov.

Should the CDC, State Health Department or Governors’ office mandate the cancellation of events, the Connecticut Sports Management Group, Inc. will provide all participants with more detailed information regarding event postponements, cancellations and refunds.